Video: Sara Lowes – I Find You

England, I Find You, Sara Lowes, The Joy of Waiting 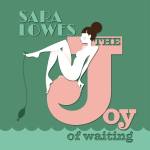 Manchester, England’s Sara Lowes, keyboardist for The Earlies, will step out solo to release her sophomore album, The Joy of Waiting, on 23 February 2015.

The album’s second single, “I Find You,” would not sound out of place in a Bond or Bourne film with its pulsing beat and Middle Eastern string arrangements. Case in point: the cinematic subversiveness of the song’s video.