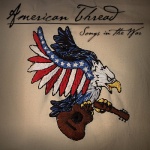 Read my review of Songs in the War here and stream/purchase the album below.